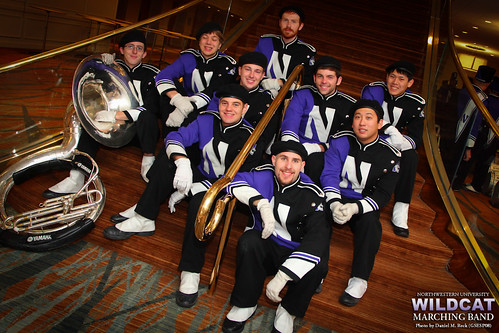 "We launched it just after the last home game," says the band's Director of Web Media, Daniel M. Reck (GSESP08). "Over one hundred official photos from the Meineke Car Care Bowl trip are being posted over the next few days."

Many of those photos were taken by Tom McGrath (C03), the Wildcat Band's Director of Photography, who was assisted by Reck during the trip. Both are NUMBALUMS.

"I started working with NUMB several years ago," says McGrath, who is also owner of TCMcG Photography, which has provided professional headshots for Northwestern students launching their musical and artistic careers. His images and videos have been used to promote the band on campus and the band's website.

As more social networks emerged, it was time to find a "broader way to showcase and distribute Tom's work," Reck says. The new Flickr-based stream was selected for its easy accessibility and social features.

"Fans can go out right now and start commenting on photos," says Reck. "In fact, they can also contribute their own favorite shots."

An open NUMB photo group, in addition to the official photostream, has also been created so that fans, current band members, NUMBALUMS, parents, and anyone else can share their own snapshots of the band. All that is required is a free Flickr membership.

Shutterbugs who do not wish to use Flickr can also donate photos directly on the Photo Highlights page on the band's website.

"I like having a solution for our fans," says McGrath.

In addition to the fun of seeing friends' photos of the band, the NUMBALUMS organization hope that they will become an integral part of the recorded history of the band, which celebrates its one hundredth anniversary this season.

Brittany Petersen (J09), Vice President of Publicity for the NUMBALUMS, has been digging through the Northwestern University archives to find historic images of the band in newspapers, yearbooks, scrapbooks, and shoeboxes. That collection only scratches the surface, she says.

"Pictures are easy to collect digitally," Petersen says, inviting the hundreds of fans and alumni who have images (or video or films) featuring any Northwestern band to share them on Flickr or through the band's website. 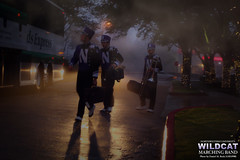 The photos will be collected with other artifacts, including written and oral histories, as part of a comprehensive project.

"If you have memories and stories that you feel should be a part of the NUMB record, illustrating the personality of the bands or their personnel...please contact us at This email address is being protected from spambots. You need JavaScript enabled to view it.," says NUMBALUM Christina Langlois (S94).

"I feel like we'll get a flood of submissions from over the years," says Petersen.