November 26, 2011 — EVANSTON, ILL. — The persistent drizzle in Ryan Field today could not wash away seniors' tears as they were recognized for their years of service in the Northwestern University "Wildcat" Marching Band.

It was a day for emotional traditions. The halftime finale was "March of the Steelmen," which has been performed by the Wildcat band at the end of each home season since 1928, "just two years after the dedication of Ryan Field's predecessor, Dyche Stadium," explained Pete Friedmann, the Voice of the Wildcat Band, whose words reverberated through the P.A. system. "This year, once again, we salute our seniors and you, our loyal fans," said Friedman.

Then, Friedmann introduced each of the ensemble's twenty-seven members who are finishing their tenure this season. Mary Baker of Frankfort, Ill., fought to contain tears as she joined the other graduating saxophonists at the front of the field. They and the rest of the seniors joined arms and swayed as Director of Bands Mallory Thompson conducted the University Hymn.

Graduating members then took up their instruments and performed the first verse of "Go U, Northwestern!" on their own, before being joined by the rest of the band.

The sea of purple poncho-clad fans burst into applause, their spirits undampened by the mist. 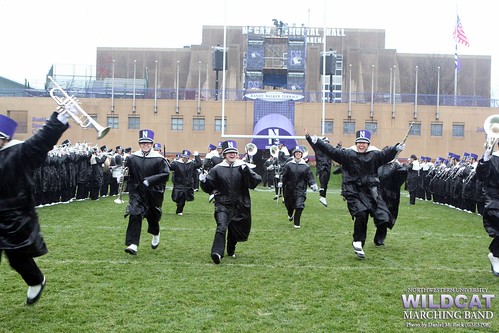 After the game, the band performed its usual reprise before lining up to form a tunnel on the north end of Ryan Field. As the underclassmen performed the fight song, the graduating members stormed out from the end zone, just at the team does at each game.

Thompson, herself a NUMBALUM, then called the band to form into its usual post-game huddle, except the seniors formed a smaller, tighter circle within. She spoke quietly to the seniors, expressing her gratitude.

"You're all NUMBALUMS now," she said. Then pointing to herself, she said with a hint of sarcasm, "See what you have to look forward to?"

"That wouldn't be so bad," replied one of the seniors. Everyone laughed.

And one last time, senior sousaphonist Dominic Macanas of Wahiawai, Hawaii, hoisted his instrument and played a pitch. And, fulfilling tradition, the Wildcat band members sung their alma mater's hymn in four-part harmony, concluding with, "Hail to Purple, Hail to White. Hail to thee, Northwestern!"

The graduating members are, with their years of service: