NUMB Ready to Journey to Texas 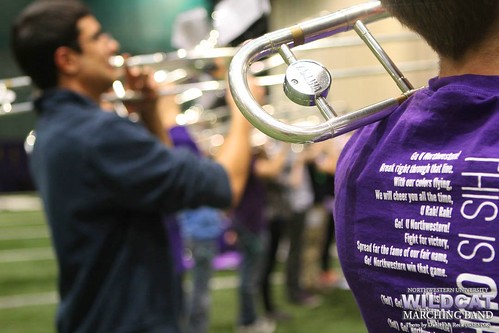 December 28, 2011 — EVANSTON, ILL. — "Welcome back, everyone!" said Director of Athletic Bands Daniel J. Farris, as the members of the Northwestern University "Wildcat" Marching Band gathered on the indoor turf at Trienens Hall.

The band growled in excitement.

In just hours, they will board a chartered flight from O'Hare International Airport and fly to Houston, Texas, in support of the Northwestern football team as they look for a victory at the Meineke Car Care Bowl of Texas.

"It's very exciting to be going back to Texas," said drum major Michael San Gabino (Mu13). He conducted the band at its bowl performance in Dallas last year.

"Let's get into some sectionals," said Farris, "And then work a bit on pregame. We'll get a lot of rehearsal time down there." 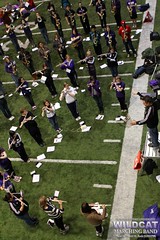 The band's itinerary includes several hours of rehearsal time at Rice University and the University of Houston before they entertain alumni and fans at the bowl game and the associated festivities.

Then, the band will take the field at Reliant Stadium, following the Texas A&M Fightin' Aggie Texas Band's pregame performance.  The Wildcat band will perform first at halftime.

"Our halftime show will be like the one we did in Iowa," said trombonist Alex Moe (WCAS12).

"I am really impressed with the group," said Farris. "It's been a lot of weeks since we last performed this show." 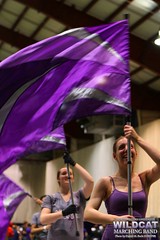 "We have six minutes, so we're fixing it for time," he said. The band will adjust its drill accordingly. "We'll play a shortened version of 'Sgt. Pepper's' and go right into 'Eleanor Rigby.'"

After two hours of practice, Farris called the band to the sideline.

"Give it everything you have," Farris said. "Let's be sure to have dignity and pride in our performances and everything we do."

"I'm proud of this band," said Farris. "They have brought consistency and a high level of effort to every show, and they're always getting better in quality."

Then the Wildcat band members packed up their instruments and equipment in a waiting truck.  Tomorrow, they will report at 6:45 a.m. to begin their fouth bowl trip in as many years.