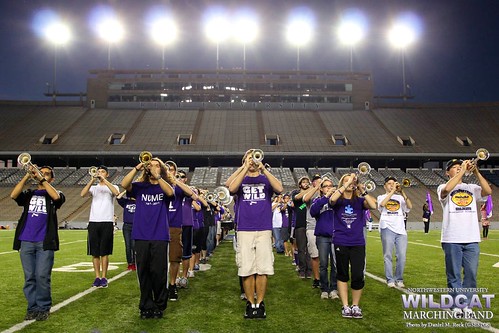 December 29, 2011 - HOUSTON, TEXAS - One thousand miles from home, clad in purple t-shirts and shorts, members of the Northwestern University "Wildcat" Marching Band still worked up a sweat as they rehearsed their fast entry... again.

The temperature at the Rice University stadium was a relatively balmy 54 degrees, compared to the usual teeth-chattering weather back home in Chicago.

"Okay band, we have just three more rehearsals and then we're doing this for real." The words of Director of Bands Daniel J. Farris echoed through the empty stadium as band members scurried to their next rehearsal positions.

With a compressed time limit for both the pregame show and the halftime program, the band is working hard to adapt to rapid-fire drill changes. The footwork is not the only thing changing in this post-season game.

"Remember, the numbers on the field aren't going to be in the same place," said Farris. "Reliant Stadium has professional hash marks and numbers." Band members nodded in understanding. 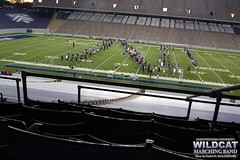 "It's great to see the band really come together so quickly," says snare drummer Andrew Rothschild (WCAS14), who is on his second bowl trip.

This was the first of three rehearsals in Houston for the Wildcat band. Tomorrow, they will rehearse at the University of Houston and again at Rice University.

"Everyone, I'd like to introduce Chuck Throckmorton, who's the director of 'the MOB' here at Rice [University]," said Farris.

The MOB is the fedora-topped Marching Owl Band, which entertains the Owl fans with humorous shows in a style very different from the Wildcat band or the Texas A&M Fightin' Aggie Band. NUMB will appear with the later band at the Meineke Car Care Bowl on Saturday.

Fans of the Wildcat band are invited to attend an open rehearsal at Rice University stadium tomorrow (Friday) from 3:30 to 5 p.m.

"We have had plenty of fans come to watch the MOB," said Throckmorton. "It'd be great to have Northwestern [fans] visit."

Visitors should enter from University Boulevard and park in the lot south of the stadium [MAP/DIRECTIONS]. Fans will enter through the gate at the south east end of the stadium, through a tunnel leading directly onto the field. Guests should seat themselves in the east stands facing the press box.

"Tomorrow afternoon is going to be serious run throughs," Farris told the band.

"It's a challenge, but we're working hard," said Rothschild, who will be the band's spirit leader next fall. "It'll be great," he said.