IT'S GAMEDAY: The 2011 Meineke Bowl of Texas 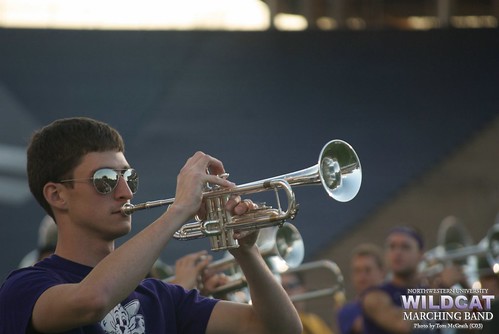 For the fourth year running, and the second in a row in Texas, the Wildcat band is performing in at a college bowl game. At 11 a.m., Northwestern University will kickoff on the gridiron against Texas A&M University. The teams both have 6-6 records leading into the game, which will be broadcast on ESPN.

For the band and the team, the day will start much earlier. Early risers in Houston will see an impromptu parade of purple and white as the Wildcat band makes its way down the street from their hotel to greet the team.

"We'll find a spot to warm up and say 'Welcome to Northwestern' to some unsuspecting Texans along the way," says Director of Athletic Bands Daniel J. Farris. 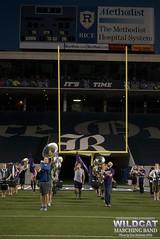 At 8:10 a.m., as the team boards their buses to the stadium, the Wildcat band will play and cheer them on in the style of "Walk With the 'Cats" back home at Ryan Field.

Next up, the band will be joined by Willie the Wildcat and the Northwestern Spirit Squad for a performance at the Northwestern Alumni Association's Pre-Game Tailgate outside Reliant Stadium.  University President Morty Schapiro and Athletic Director Jim Phillips will also appear.

Then, the band will parade to the stadium, pass through a security screening, and prepare for its pregame performance.

"We will follow the Texas A&M band at pregame," says Farris.

If all is on schedule, at precisely 10:43 a.m., the Wildcat drum line will emerge on to the field at Reliant Stadium, and dozens of growling musicians will storm onto the field with their trademark chair step entrance.

"They only give us five minutes for pregame," says Farris, "So it's the fanfare, downfield ['Rise, Northwestern!'], the Aggie fight song, and 'Go U!' right off the field."

As is tradition, the band will honor its rival for the day by performing the Aggie War Hymn, and present the colors of the Big Ten schools. Special performers are assisting the band's color guard today: Graduate music conducting students Leah McGray (GMu13) and Deanna Tham (GMu12)—who are usually seen leading the band alongside the drum major—are donning uniforms to fill positions by guard members unable to travel for the game.

"We are very proud of them," says Director of Bands Mallory Thompson. "They have a great attitude." 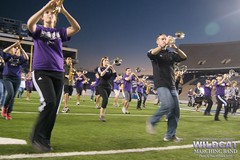 After performing from the stands for the first half, the Wildcat band will perform first at halftime.

"The show will be popular Beatles selections," says Farris. "And there's a treat at the end for the fans."

When play resumes, the band will continue its performance from the stands, charging up the fans filling Reliant Stadium.

At the conclusion of the game, the Wildcat band hopes to be celebrating with their team, but there will be plenty more to do. Instruments, ladders, sideline markers, flags, and countless other pieces of equipment will have to be packed and stowed for the flight back to Chicago.

Students will don business dress for the trip.

"We are ambassadors of Northwestern," says Farris. "We put on a good show on and off the field."

By midnight, the Wildcat band will have arrived back on campus and unloaded their equipment. Just in time to celebrate a bright new year for Northwestern University.