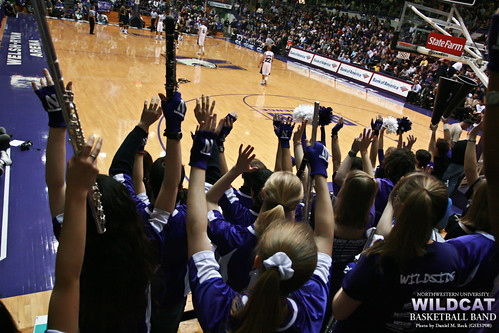 January 23, 2012 — EVANSTON, ILL. — Dozens of band alumni will once again don purple shirts and ready their instruments to play in support of Northwestern basketball this Saturday, Jan. 28., as the Wildcats challenge Purdue at Welsh-Ryan Arena. The Wildcat faithful will perform alongside the Northwestern University "Wildcat" Basketball Band.

"Director [of Athletic Bands] Dan Farris has been kind enough to invite the NUMBALUMS to play with NUBB for one Big Ten game each season the past couple years," says Brittany Petersen (J09), Vice President of Publicity for the NUMBALUMS. "We're not about to let a good thing end!"

The NUMBALUMS organization, which includes alumni from all of Northwestern's band programs including the marching band, asks interested alumni performers to register on their website before midnight this Friday.

"We have had about thirty alums participate in previous years, and expect a similar turnout this year," says NUMBALUMS Vice President of Programming Lauren Maginity (C10).

"For just a $5 registration fee, [NUMBALUMS] members get free entry to the game and the chance to play with the band in the stands," says Petersen.  Band alumni who have not joined NUMBALUMS pay $25, which includes one year of membership in the organization.

According to Petersen, NUMBALUMS membership has several benefits: 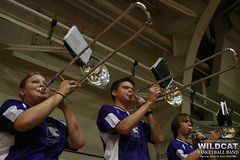 "The real benefit of NUMBALUMS membership is being a part of the community," Petersen says. "People come back year after year for Homecoming and this NUBB game and other events for many reasons."

"Most of all, it's a chance to hang out with friends old and new who bleed as much purple as you," she says.

The NUMBALUMS also supports and promote the efforts of all university bands, the Bienen School of Music and Northwestern Athletics, says Petersen.

For Saturday's 3 p.m. matchup, registered alumni performers should meet at the lobby of McGaw Hall and Welsh-Ryan Arena no later than 2. p.m., and they should wear wear a purple shirt and khaki pants. Alumni are reminded that friends and family attending the game will need to purchase their own tickets for game entry. 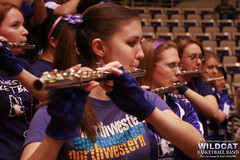 "Alums are welcome to park in the Regenstein lot and catch a ride on the band bus that leaves from Regenstein at 1:45 p.m.," says Maginity.

"I am excited to able to take my flute out of its case for the first time in months, and of course I'm looking forward to a Wildcat victory!" she says.

Questions about the NUMBALUMS performance should be directed to Maginity at This email address is being protected from spambots. You need JavaScript enabled to view it..

"Come get to know current band members, check in with old friends, and watch the 'Cats dismantle the Boilermakers!" says Petersen.