Pete Friedmann: Voice of the Band... and now Wildcat Basketball 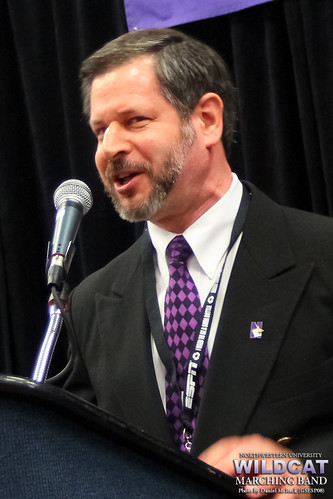 Yet, many Wildcat fans probably recognize the you-can-hear-the-smile inflections of rookie basketball announcer Pete Friedmann (C79). After all, he's been the Voice of the Northwestern University "Wildcat" Marching Band for more than three decades.

Nonetheles, someone saw—or rather heard—potential in Friedmann. When the call for auditions went out, he tried out "like anyone else," he says. He got the job.

"My wife and I have been going to NU Women’s Basketball games for at least 20 years," he says. "I would be there for most games anyway, and I liked the idea of trying something new and challenging along the way."

Although Friedmann has been in the announcer's box at hundreds of Northwestern athletic events, he has always had the benefit of knowing ahead of time what the Wildcat Band planned for its performances.

"The excitement in being a sports fan is that you never know until it happens," he says. "The biggest challenge for me—besides not being able to cheer for the ‘Cats and sing along with NUBB [the basketball band]—is keeping track of everything when it seems it’s all happening at once, and trying to announce it in a timely manner."

While Friedmann works from a script with the marching band, often counting footsteps and drumbeats to time his announcements, the flow of a basketball game is a bit more frantic.

"Substitutions, which I try to announce, can occur while I’m announcing fouls, free throws or promotional items," he says. "Sitting at floor level, sometimes the players and officials block my view of the action or a referee’s signal. But after years of just watching games, being involved this way provides quite an adrenalin rush!" 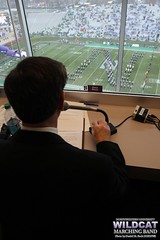 Northwestern football fans are familiar with Friedmann's trademark style. After halftime, while he watches the game and NUMB performs in the stands, he takes up a perch in the press box and thoughtfully pens the rhyming stanzas he reads during the band's postgame show. And of course, he never forgets to cue the band members, who shout "buckle up!" to remind fans to drive safely.

"I’d like to explore other call-and-response things with NUBB, the way the band [already] helps with the 'No Smoking' announcement and [replies] to 'There’s a timeout on the floor.'" he says. "Maybe fans will pick up on it, too."

Friedmann, who is a NUMBALUM and once played clarinet in NUBB, says there are some favorite basketball traditions he would like to continue, including "the way we introduce the players by alternating teams and allowing them to shake hands or greet each other at center court," he says. "It’s a disappearing gesture of good sportsmanship in an age when many other schools are emulating the NBA with darkened arenas, spotlights, videos and other effects." 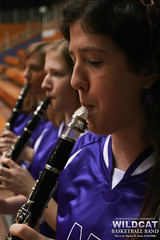 However, just as when Friedmann took over as Voice of the Wildcat Band over 31 years ago, he plans to bring his own personality to the new role.

"NU Athletics has been very kind inallowing me to develop my own style instead of requiring that I copy someone else," he says. "It’s a process, and I’m going to take my time. I have my own sound and speaking style, but I’m not really doing anything unique...yet."

After being a fan in the stands for so many years, Friedmann says he enjoys the new experience. "I can’t lead cheers," he says, "but I’d like to think I can contribute to the experience and help increase our crowds in Welsh-Ryan Arena."

The Wildcat faithful have two more opportunities this season to hear Friedmann as the new voice of women's basketball at Welsh-Ryan Arena. On Feb. 23, the Wildcats will challenge Iowa. Michigan State will visit on Feb. 26. Northwestern fans may purchase their tickets online through the Northwestern Ticket Office, or by calling 1-888-GO-PURPLE (467-8775). Also follow Northwestern women's basketball on Facebook and Twitter.