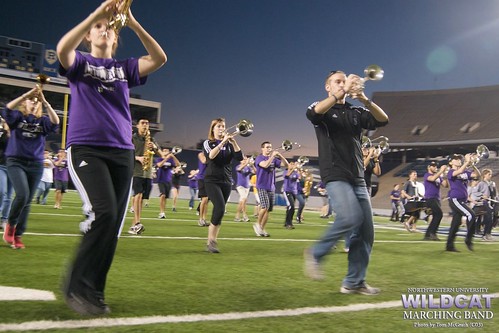 July 15, 2012 — EVANSTON, ILL. — "I'm incredibly excited for the great challenge we have in front of us!" says Daniel J. Farris, director of athletic bands at Northwestern University.

"I don't think NUMB has ever reported to campus this far in advance," says Farris. The scores of student musicians, who represent nearly every major and residence hall at the university, are set to arrive on Sept. 2—more than three weeks before fall quarter classes actually begin.

They will have just six days to prepare for the Northwestern football home opener against Vanderbilt University at Ryan Field. With no time to spare, first year students will learn the Wildcat band's traditional "fast entry" sequence. The sustained heart-thumping, leg-pumping routine—all while hollering the Wildcat Growl at the top of one's lungs—has been the time honored method of taking the field for decades. It would just as easily fit into the football team's warm ups.

"It's been a while since we have had four home games in a row," says Farris. The band customarily learns, rehearses, and memorizes all new drill and music for each home game. A "great challenge" indeed.

The Wildcat band's staff has been feverishly organizing for the start of the season, selecting music, designing drill, and prepping equipment. Recent visitors to the band's website have also seen changes there. 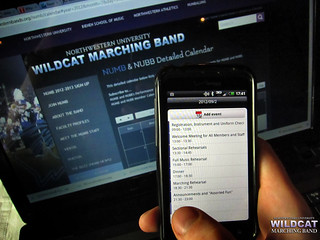 "Students can now use their u.northwestern.edu or Google accounts to synchronize live with NUMB's band camp and rehearsal calendar," says Reck, who is also a NUMBALUM. "Friends, family, and alumni can also subscribe to the band's performance calendar," he says.

"We've launched a new Facebook page for the Northwestern Bands to compliment the existing Facebook page for NUMB," says Reck, "and we invite fans to continue donating their own photos to the NUMB Photo Group on Flickr."

NUMBALUMS and the Wildcat faithful will also continue to enjoy the professional photography and videography of Tom McGrath (C03) on NUMB's photo and video pages and on the Northwestern Bands' official Flickr photostream. McGrath, a NUMBALUM, has served as the Northwestern Bands' Director of Photography for several recent seasons. Fans can also subscribe to an RSS feed of the band's news and photos.

"The website looks awesome!" says Farris. "Everything is up to speed."

Just in time. There are only a few weeks to go before the nearly 200 students of the Wildcat Band descend upon Evanston to prepare for the opening match up at Ryan Field.

Tickets for that game, and all Northwestern home football games, are available at NUsports.com or by calling 888-GO-PURPLE. The game will be broadcast on Big Ten Network, and fans can follow the play live at @NU_SportsLIVE on Twitter. They can also find Head Coach Fitzgerald on Facebook and Twitter, and Wildcat Football tweets as @NUfbfamily.