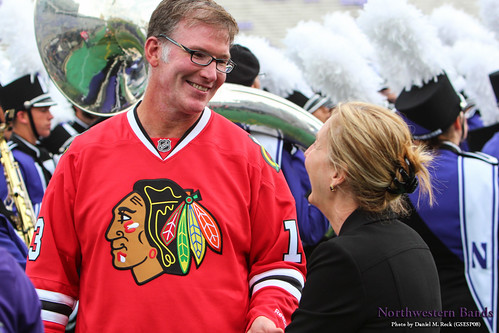 Tonight, a sold-out crowd at the United Center will welcome the Northwestern University "Wildcat" Marching Band at the Chicago Blackhawks' 2013 Training Camp Festival. This just over a week after the Blackhawks' Jim Cornelison sang the national anthem with the Wildcat Band during the home opener at Ryan Field.

"There will be around 90 NUMBers there to play between the action of the Blackhawks scrimmage," says Farris. Fans with general admission tickets may enter through gates 3, 6 and 7 on Madison St. and Adams St. starting at 5 p.m. Those participating in the "Mad Dash to Madison" 5K run/10K skate event will enter at gate 2.

The first 10,000 fans to arrive at United Center will receive a Jonathan Toews bobblehead. More information about tonight's event has been posted on the Chicago Blackhawks' website.

"This event sells out every year," says Farris.

Welcoming the Class of 2017

Tomorrow at 9 a.m., the Wildcat Band will lead just over 2,000 new students in the "March to the Arch" along Sheridan Road through the Weber Arch at the south end of the Evanston campus.

It will be the fifth time the band and new students have stepped off together to start a new academic year. According to The Daily Northwestern's Patrick Svitek, the new custom was instigated by Burgwell Howard, assistant vice president for student engagement.

"We have some old-time traditions — painting The Rock and things like that," said Northwestern president Morton Schapiro in The Daily. "It's nice, thanks to him, to have some new ones."

Later at about 5:10 p.m., the Wildcat Band will be part of new student festivities hosted at Millennium Park.  Students will be "getting acquainted with themselves" and NU traditions, Josh McKenzie told The Daily's Amy Whyte. McKenzie is Northwestern's director of the first year experience.

"The program will be around 40 minutes," says Farris.

On Thursday, the City of Evanston hosts "A 'Kits and 'Cats Kick-Off" from 5 to 8:30 p.m. on Sherman Ave. between Clark and Church Streets. The Wildcat Band will once again provide entertainment for the event which will also feature special guests and visits with football players.

According to the city's website, the celebration will "get everyone excited about the ETHS Friday evening football game versus Maine West and the Sat., Sept. 21 Evanston Day at Ryan Field as NU plays Maine."

"It should be a fun time," Farris says. 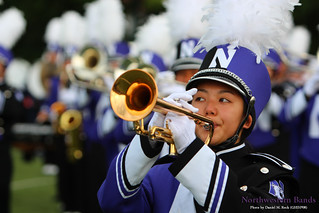 As the finale to 'Kits and 'Cats Week, it will be Evanston Day at Ryan Field as the Northwestern Wildcats will welcome the University of Maine Black Bears to Ryan Field for their third home game in a row.

Before the game, fans are invited to Wildcat Alley just north of Ryan Field and behind Welsh-Ryan Arena to enjoy food, games and entertainment. The Wildcat Band will give a free concert at 1:30 p.m.

Inside the stadium, the band will step off for its pregame show at about 2:15 p.m., with kick-off scheduled for 2:30 p.m. The contest will be broadcast on BTN and also on ESPN Radio (1000 AM) and WNUR Sports (89.3 FM and wnursports.com). Fans can follow the play live at @NU_SportsLIVE on Twitter. They can also find Head Coach Fitzgerald on Facebook and Twitter, and Wildcat Football is also on Facebook and tweets as @NUFBfamily. Be sure to also follow Twitter hashtag #B1GCats for the latest Wildcat athletics action.

Tickets for the game, and all Northwestern home football games, are available at NUsports.com or by calling 888-GO-PURPLE.  Evanston residents may enjoy discounted tickets by using promotions code "PURPLE" when ordering tickets online.

Finally, next Monday the Class of 2017 will be officially greeted by President Shapiro in a convocation at 10 a.m. at Lakeside Field. The President's Convocation is a longstanding tradition at Northwestern and includes university dignitaries and the Wildcat Band in the ceremony.

After that, the Wildcat Band will begin its normal 4-day-a-week rehearsal schedule and start preparations for homecoming weekend, which includes a parade and pep rally on Fri., Oct. 4 starting at 6:30 p.m. The Saturday homecoming game against Ohio State will kick-off at 7 p.m. at Ryan Field with the band's free concert at Wildcat Alley scheduled for 6 p.m.