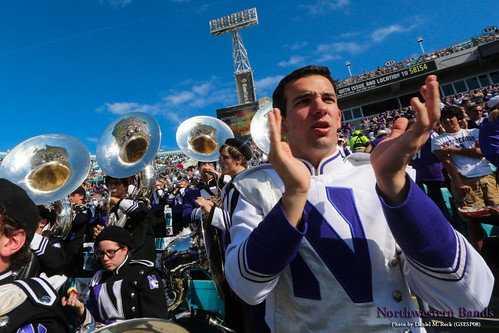 JANUARY 1, 2013 — JACKSONVILLE, FLA. — "We talked about making history," said an emotional Pat Fitzgerald as he addressed the Northwestern University faithful at the conclusion of the 2013 TaxSlayer.com Gator Bowl. The head football coach and his team had just ended the Wildcat's 64-year bowl game victory drought with a win over Mississippi State University. "This is just the beginning," he said.

The coach then called for the Northwestern University "Wildcat" Marching Band to perform "Go U, Northwestern!" one more time. Brimming with excitement, he counted the tempo himself—at nearly double time. The band, however, kept up. The energy was palpable. Student musicians' faces were streaked with tears and wrinkled with smiles.

Meanwhile, long-time Voice of the Wildcat Band Pete Friedmann watched from the EverBank Field press box. He was also blinking back tears. 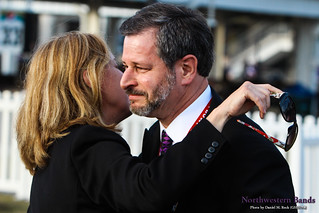 "It's been so long," Friedmann said as he choked up. "So, so long."  Friedman has been the Voice of the Band for more than three decades, and played clarinet in the ensemble before that. He was even the band's Spirit Leader. But he had never seen the Wildcats win a bowl game. Until today.

"Kinda nice to wear those shakos backwards at a bowl game, isn't it?" asked Director of Athletic Bands Daniel J. Farris, as the band reassembled just outside the stadium. The band traditionally reverses its headgear after victories, but hasn't done it the post season since the 1949 Rose Bowl in Pasadena, Calif.

"Thank you all so much for all your hard work. And thank you to our seniors—this must be extra sweet for you," said Farris. He also acknowledged the work of the graduate assistants, the band's photographers and web media director, and student band staff. 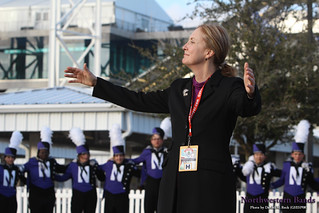 Then, the band circled up with arms around one another's shoulders. They surrounded Director of Bands Dr. Mallory Thompson, as they always do at the conclusion of a performance. They awaited her comments.

She stood silently for several moments, turning to meet the eyes of each band member.

Thompson reflected briefly on the work of her predecessors, Glenn Cliffe Bainum and John P. Paynter, the later of whom had his Northwestern band career bookended by Rose Bowl trips in 1949 and 1996.  Thompson told the band she was grateful to be with them in this moment.

"I'll miss you," she said, not wanting to wait until next season. She also thanked the graduating class. 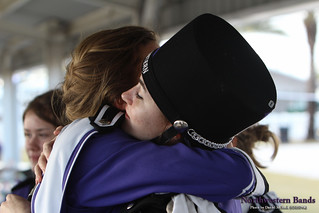 As one of those seniors sounded his final pitch for the alma mater, the gathered crowd listened as the Wildcat Band sang the University Hymn in gentle four-part harmony while swaying to-and-fro.

Finally, an exchange seldom heard by the public, but which has been the traditional closing for Wildcat Band performances for generations.

"What school's got the best band?" asked Thompson.

"Northwestern!" the band called back, leaning back with faces turned upward.

"What school's got the best band?" she asked again, more insistently.

"NORTHWESTERN!" the students cried out.

"What school's got the best band?" she demanded with eyes gleaming.

"NORTH... WESTERN!" they hollered to the sky, nearly toppling over.

"You better believe it."

Also follow the University Bands, which include NUMB as well as the Symphonic Wind Ensemble, Symphonic Band, Concert Band, and the Northwestern University "Wildcat" Basketball Band on Twitter, Facebook, Google+, Foursquare, and Tumblr.

—Daniel M. Reck (GSESP08) is Director of Web Media for the Northwestern University Bands. A NUMBALUM, he played clarinet and alto sax in NUMB and NUBB. Since 2007, he has been honored to photograph and report stories for the Wildcat Band, as well as maintain the University Bands' website and social media presences.