Moving NUMB to the Gator Bowl: How Do They Do It? 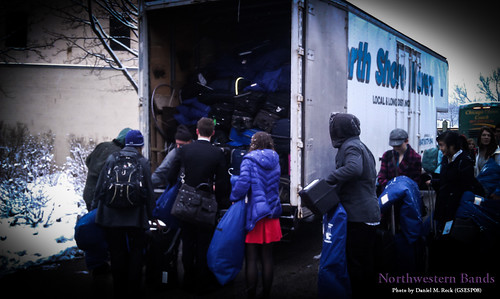 DECEMBER 29, 2012 — IN THE SKIES ABOVE KENTUCKY — Nearly 200 students, a dozen professional and graduate staff members, hundreds of equipment cases and garment bags full of uniforms, crates of plumes, three full-size ladders, a podium for the drum majors (and their parade maces), a load of professional A/V equipment, portable public address systems, a set of yard line markers, a well-traveled folding chair for Director of Bands Mallory Thompson, and a large tote of SpiriTeam gear... including the requisite rubber chicken. It's a lot of people and stuff to move.

What does it take to transplant the Northwestern University "Wildcat" Marching Band to Jacksonville, Fla., for the 2013 Gator Bowl?

"A chartered flight is really the only way to go," says Daniel J. Farris, director of athletic bands. 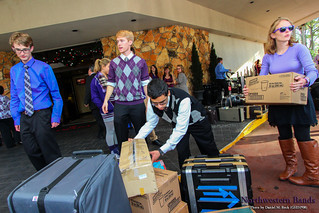 Outside Trienens Hall, in the shadow of Ryan Field in Evanston, student band staff members scurry to-and-fro. They are coordinating the big move as the rest of the band arrives with their luggage, which is being squeezed into every possible cubic inch of one of the large cargo trucks.

"We have to be a step ahead," says Jeff Hosan (McC14), NUMB's band staff manager. He and his crew have packed the band's mass of equipment over two days. His colleague, Raj Desai (McC14) is packing the drum major's maces and a camera tripod with a big pile of warmers.

"Bring extras of everything!" instructs Farris. "We can never be too prepared." Sure enough, spare gloves, shakos, and entire uniforms are loaded in. Those extras came in useful at last year's Meineke Car Care Bowl of Texas, when two conducting graduate assistants were pressed into service at the last minute as substitute color guard members to present the colors of the Big Ten Conference.

"We really rely on our band staff," says Farris of the 14 student musicians charged with coordinating the chaos. "They do an amazing job."

After boarding the plane at one of O'Hare International Airport's remote hangars, the band and a few Wildcat VIPs settle into their seats while the SpiriTeam hands out special spirit sheets.  An inspired flight attendant took a cue and, after welcoming the band, asked "Hey band! Can you growl?"

Evidently, yes. Wildcat paws and growls all around. The VIPs smiled broadly. 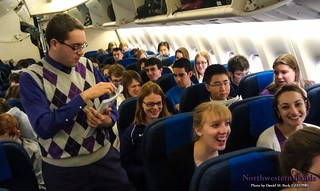 Trombonist and electrical engineering student Motoki Mizoguchi (McC13) started singing "Go U, Northwestern!" as the plane took off. The entire cabin echoed with the melody of the 100-year-old tune as the band joined in. During the break strain, without the metronomic clapping, things went a little awry.

"You're rushing! You're rushing!" shouted Mizoguchi to the rows ahead of him. The flight attendants laughed, but the band went on, bringing it back together for the second verse.

And to feed all this? Well, the flight attendants offered first class service to the entire plane, with sub sandwiches, fresh fruit, hot tea and coffee, ice cream, and a seemingly never-ending train of other snacks.

"No way!" marveled bowl trip rookie Geoffrey Miller (GMu14), one of the Northwestern bands' graduate conducting assistants. "It just doesn't stop!"  Band members were wide-eyed in agreement, but were vocal in their appreciation of the United Airlines flight crew. 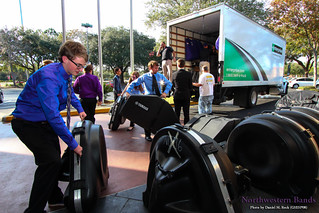 "The calories don't count at 37,000 feet," said one flight attendant. Of course, all those calories are going to be put to use, as the band's grueling schedule over the next four days includes hours of rehearsals, a lengthy parade, multiple pep rallies and tailgates, and of course, the game performance at EverBank Field for the TaxSlayer.com Gator Bowl. (A detailed calendar appears on the Wildcat Band's website.)

Now, as the band prepares to land in Jacksonville, the band's student staff is putting on their game faces. They'll be making sure everything is good to go for a full marching rehearsal on a local high school football field this afternoon, and for many more events in the days to come.

"The band staff is tremendous," says Hosan of his team. "They work really hard to amplify the band's efforts, and to not be noticed [while doing it]."

Kickoff is set for noon ET on Tuesday, Jan. 1, with national television coverage on ESPN2 and the radio call in Chicago available on WGN720 and WNUR (89.3). Fans can follow the play live at @NU_SportsLIVE on Twitter. They can also find Head Coach Fitzgerald on Facebook and Twitter, and Wildcat Football is also on Facebook and tweets as @NUFBfamily. Be sure to also follow Twitter hashtag #B1GCats for the latest Wildcat athletics action.