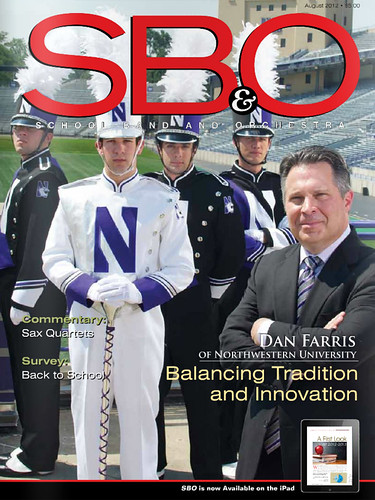 AUGUST 19, 2012 — EVANSTON, ILL. — Daniel J. Farris' goal "is to balance the signature moves and traditions that have been a part of the [Northwestern University] Wildcat Marching Band field shows since the group's inception way back in 1926 with the innovations in the marching arts and entertainment," reports Eliahu Sussman in the August issue of School Band and Orchestra magazine.

As tweeted last month, the trade magazine visited the Evanston campus to photograph Farris, drum major Michael San Gambino (Mu13), and other members of the Wildcat Band for the cover story, which spans 11 pages.

"We've set in place a proven system and a hierarchy of student leadership," says Farris in the article, describing his "secret for making it all work" in the 13 years he has directed the athletic bands.

"A special part of being at Northwestern is being surrounded by such talented and bright students," he says.

It's a sentiment shared by Dr. Mallory Thompson, the university's director of bands.

"I'm all in favor of the students putting their stamp on the organization and watching evolve," she says. Thompson is herself an alumna of the ensemble, and just the fourth director of bands at Northwestern. 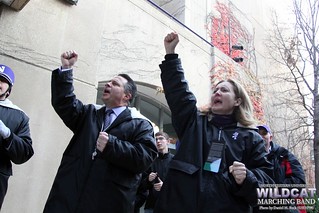 The extended interview, titled "Balancing Innovation and Tradition," discusses Thompson's and Farris' insights as music educators, and their approach to maintaining NUMB's history while at the same time keeping the band moving forward.

"The Wildcat Band is primarily traditional in what we do during pre-game, but our halftime shows can include anything...from classical to Broadway to rock," says Farris.

Farris credits several music educators from his past with influencing his style, including his high school band director, Mike Davis, who moved to James Madison University in Virginia.

"I followed him there to study music education," Farris says. "He was a master motivator and understood how to entertain an audience." Farris also noted his other teachers and professors, including Steve Spiwak and Gary Smith, the later of the University of Illinois.

Another thing Farris learned: "Surrounding yourself with talented people is essential in running a program, especially for a marching band." He employs long-time Voice of the Band and NUMBALUM Pete Friedmann (C79), as well as staff of graduate conductors and graduate assistants, undergraduate students, a photographer, and a web media director to share the load. 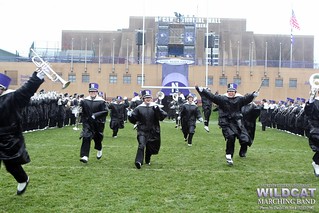 In addition to its own photography, School Band and Orchestra features more than a half-dozen photos of the band taken by Director of Photography Tom McGrath (C03) and Director of Web Media Daniel M. Reck (GSESP08) during last season's performances, including the appearance at the Meineke Car Care Bowl of Texas. One of the photos features NUMB's traditional end-of-season send-off of the seniors at Ryan Field.

More of those traditions "happen during the pregame and that's the real tradition in terms of drill design," says Thompson. "The pregame is an homage to the Big 10, and to the traditions of the bands in this conference."

"When I came [to Northwestern], I wanted to maintain and build on these traditions, while keeping current with halftime music and drill design," says Farris.

"He does it by encouraging students to play musically, to play smart, and to never ever make a bad sound," says Thompson.

View the entire article in School Band and Orchestra below. See more of photos of the Northwestern Bands at flickr.com/NUbands.