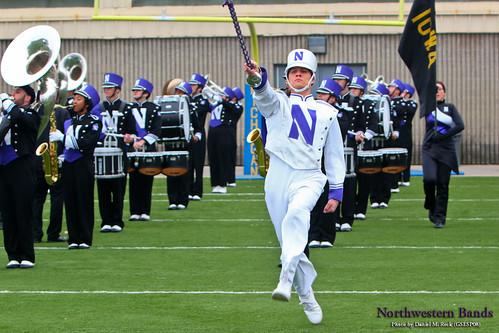 FEBRUARY 12, 2013 — EVANSTON, ILL. — "I'm excited for the opportunity to welcome new members and provide a sense of belonging to members of NUMB," says Elisabeth Sladek (WCAS16), one of two new drum majors who will helm the Northwestern University "Wildcat" Marching Band for the 2013-2014 season.

Her new partner on the podium is Fritz Burgher (J14), who is in Washington, D.C., this term participating in the Medill on the Hill journalism program.

"As soon as I get back, I'll be jumping right in and will begin planning for a season to remember," he says.

Of course, that seasons starts, well, now. The new drum majors' first performance will be at the Northwestern Spring Football Exhibition on April 13. They will be joining up with returning drum major Will Ritter (WCAS14), who will begin his second season in the white-and-silver uniform. The experience has changed him.

"Over the last season, I've really developed a new understanding of what it means to be part of NUMB," Ritter says. "The long hours and hard work all resulted in some of our best performances and truly defined 'Pride and Guts' for me."

Burgher and Sladek have already been formed in part by their Wildcat Band experiences. 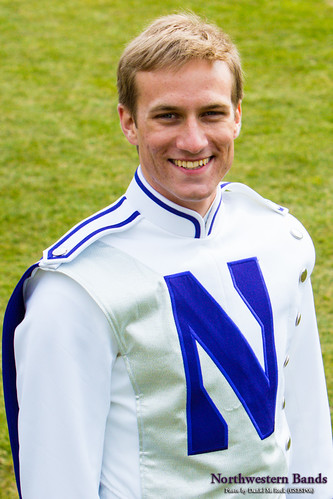 "When I joined NUMB three years ago, there was no way I could have foreseen the amazing effect it would have on my life," says Iowa-native Burgher. He will be the first drum major in some time from the Hawkeye state, a resident of "the smallest (and best)" village in the Amana Colonies.

The band has "provided me with my greatest friendships and fondest memories...without a doubt, I would not be the person I am without joining NUMB," he says.

Meanwhile, Sladek is just six months into her experience at Northwestern University, and hasn't even declared a major.

"I've come to realize that when you are a part of NUMB, you are part of something bigger than the band; you help create the sprit of the school" she says. She echoes Burgher's sentiments about the friendships and support she has found in the Wildcat Band.

It is not unheard-of for Wildcat Band Director Daniel J. Farris to appoint a rising sophomore to the post. Graduating drum major Michael San Gabino (Mu13) served three years after his selection during his first year in the Bienen School of Music. However, Sladek recognizes she has work to do.

"Since I'm only a [first year student], my biggest challenge was trying to establish myself as a leader with only one season of NUMB experience.

Burgher also had to overcome personal challenges, auditioning this year for the third time for a shot at the podium.  He says that not being selected in prior years "provided valuable lessons and taught me a lot about myself. Being chosen this year made it all that much sweeter."

"You will absolutely grow as both a leader and a Wildcat," Ritter says to both Sladek and Burgher. "My advice would be to enjoy every moment of it."

All three of these student leaders are now focused on the future.

"With all the changes that NUMB has undergone in the past few years, there is a lot of room for innovation in the position of drum major," says Ritter. Fans will have to wait until the fall to see what they come up with, but they can rest assured that the best qualities of the Wildcat Band will continue.

Burgher anticipates the "joy of standing on the podium conducting this band and producing dynamic music," he says. 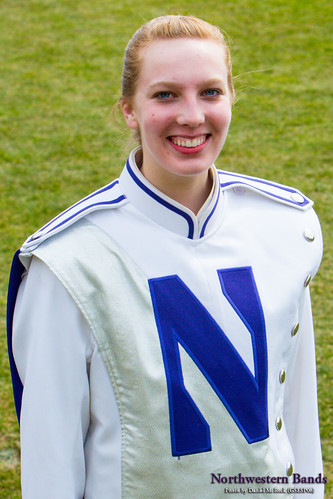 "I look forward to inspiring the 'Finest Band in the Land' to cary on the traditions of excellence, passion, dedication, and, of course, [Pride and Guts]," says Sladek, who comes to Northwestern from Crystal Lake, Ill.

Carrying the mace has been an aspiration for all three drum majors, and each participated in a rigorous interview and audition process to rise to the top of the list of candidates.

"Being able to [conduct the band] at halftime will absolutely be a dream come true," says Burgher.

Sladek says that "ever since I was nine years old and saw my first Northwestern football game, I have dreamed of being a drum major of the Northwestern Band."

There will be plenty for Sladek and Burgher to master in the coming months.

"Be prepared to work hard," warns Ritter, but then more lightly, "and have a lot of fun doing it."

He know's what he's talking about. Just a year ago at this time, Ritter said this about his first months as drum major: “I had no idea how to use a mace and had no formal conducting training."

"Michael [San Gabino] was there to help me through the learning process,” he said of the time of his fellow, more-experienced drum major.

Now, like any good Wildcat, Ritter will be there to help Burgher and Sladek become the best Wildcat drum majors they can be.