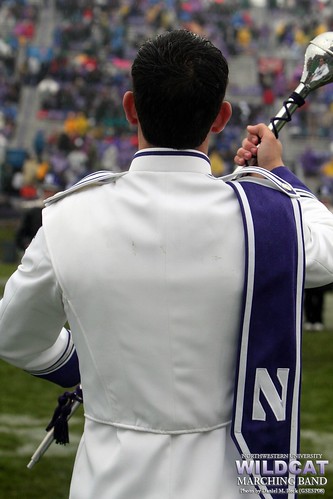 SEPTEMBER 2, 2012 — EVANSTON, ILL. — Shlepping instrument cases and all of the clothes, books, and other necessities of college life, nearly 200 students are arriving at Regenstein Hall on the Evanston campus for the first day of pre-season camp for the Northwestern University "Wildcat" Marching Band. Veteran drum major Michael San Gabino (Mu13) is among the "returners" who are greeting them and helping distribute their purple and black uniforms and rehearsal schedules.

"Every season is different," he says.

One of those differences is Will Ritter (WCAS14), the junior psychology major who is joining San Gabino with his own white and silver drum major's uniform.

"I'm looking forward to building great relationships with all of the people involved in NUMB," says Ritter, "as well as being in a position that has a big impact on such an amazing organization."

Three years ago, Ritter was like many members of the Wildcat Band, brimming with passion for the band and the university. However, he was also looking for ways to contribute more.

"At the beginning of sophomore year, it clicked for me that drum major was the perfect outlet," Ritter says, "So I decided to go for it."

Both Ritter and San Gabino, along with other candidates, interviewed and auditioned for the office. The auditions included conducting the band during the preparations for the Meineke Car Care Bowl of Texas.

For Ritter, "The most challenging part of the process was the fact that I had no experience as a drum major in high school," he says. "I had no idea how to use a mace and had no formal conducting training." 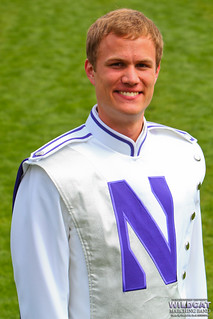 Although San Gabino was competing to retain his appointment as drum major, he shared his two years of experience in the role freely.

"Michael was there to help me through the learning process," says Ritter.

Over the years, the number of drum majors appointed each season has regularly fluctuated.

"Through the selection process, we're looking for the right fit for the band," says Daniel J. Farris, director of athletic bands at Northwestern University. "Sometimes we have one drum major, sometimes we have more."

"Even though I was the only drum major last season, I kept a lot of the same traditions from past years, only changing the Patriotic Medley mace routine," says San Gabino.

For this year, San Gabino says he has "considered changing what the drum majors do during pregame, but that's something that I have to talk over with Will."

Fans will just have to wait until the Wildcat Band's fall season starts to see what the duo have cooked up. The band's first performance is Saturday, Sept. 8, when Northwestern football opens the home season against Vanderbilt University at Ryan Field. 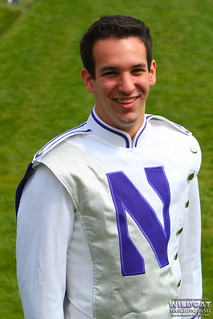 "It's fun to see the different section dynamics each year, and each band is truly unique in its own way," says San Gabino.

"There is nothing that can compare to spending hours a days rehearsing, waking up on game day to put on that uniform, and sharing every up and down with the team and the fans," says Ritter.

When San Gabino is asked what advice he would offer to Ritter as they begin their collaboration, he says, "Have fun."

"It sounds cliche, but honestly I can not believe that I will be a senior," says San Gabino. "It's easy to get caught up in the many tasks that the drum majors face day to day, but cherish each performance because it flies by way too quickly."

For Ritter, "NUMB has defined my college experience. NUMB was the first thing I experienced coming to Northwestern, and its members were my first friends."

Now. as one drum major prepares to begin his tenure while the other wraps up his time at Northwestern, it is assured that both will use their positions to welcome the newcomers to the Wildcat Band and set the stage (or the field?) for the next generation of leaders.

"I take the position of drum major very seriously," says San Gabino. "It is always an honor for me to conduct and lead this ensemble."

"It's an experience I wouldn't give up for the world," says Ritter.