Prominent NUMBALUMS Join Board of Directors for Northwestern Alumni Association 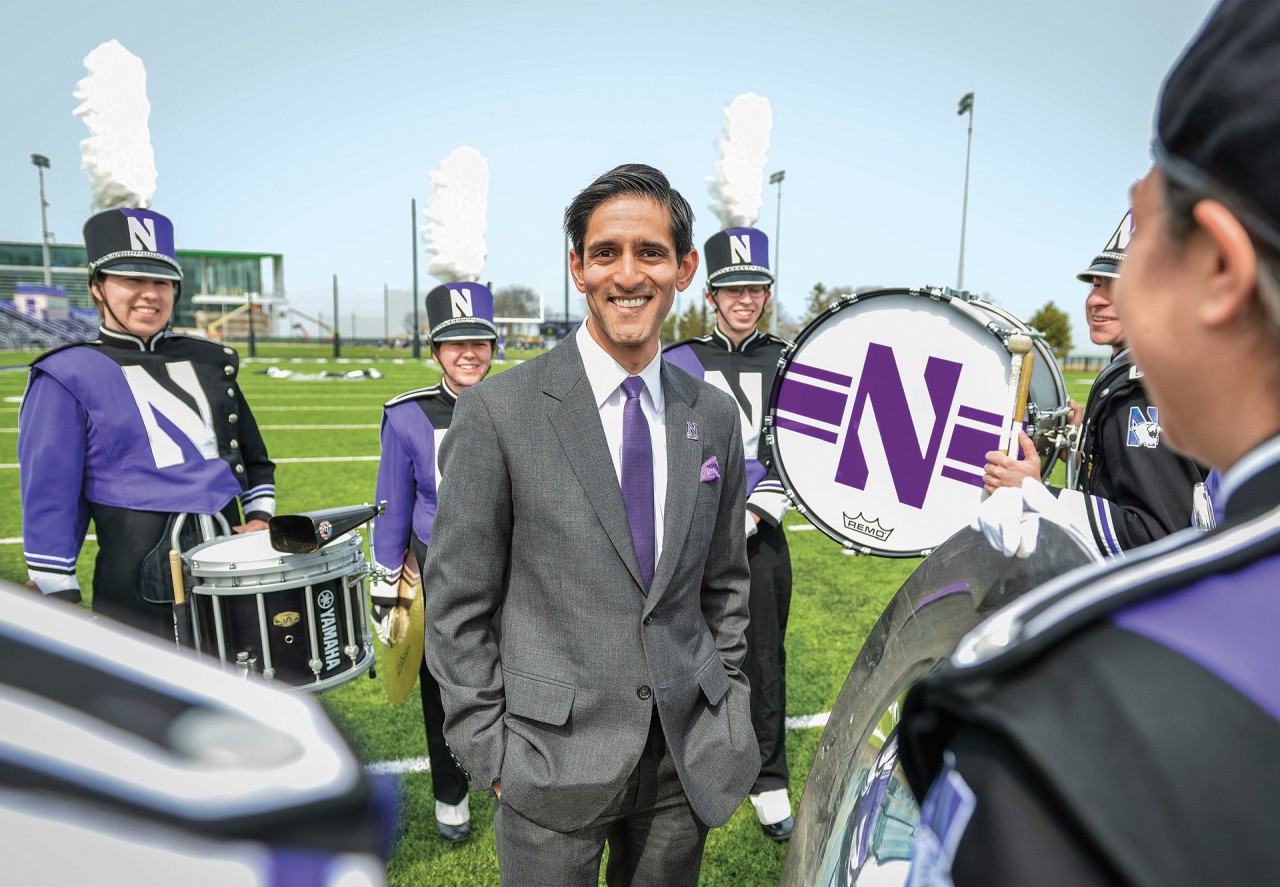 A diverse and highly accomplished group of 21 new and continuing directors has been elected to the Northwestern Alumni Association (NAA) Board of Directors. The directors, who were slated at the NAA’s annual meeting Sept. 27 represent significant experience in digital communications, international business, talent management, and branding and marketing.

Among the alumni leaders is new NAA President Samir Mayekar ’06, ’13 MBA, who as a student was the drum line captain of the Northwestern University “Wildcat” Marching Band. The co-founder and CEO of SiNode Systems, Mayekar is a University trustee who began volunteering for the NAA more than a decade ago and is now the NAA’s youngest ever president. NUMBALUM Bethany Crystal ’09 also joins the board as council director.

Mayekar said he has a deep sense of loyalty and gratitude to Northwestern, and believes he has a responsibility to pay it forward. His priorities as president of NAA, he said, are simple.

“We want to continue to adapt to today’s digital world, stay relevant to alumni who live around the globe and make sure the NAA serves the alumni of today and tomorrow,” Mayekar said. “We have 20 other amazing leaders on the board who care deeply about this institution, bring senior leadership experience and reflect the demographics of today’s students. These are the people who will help the alumni association chart a new path for the future.”

The NAA Board of Directors is composed of alumni leaders representing nearly every undergraduate, graduate and professional school from the University. The board includes officers, directors at large, council directors and ex officio student directors who collectively serve as the strategic advisory body of the NAA, helping the organization fulfill its mission of fostering enduring relationships among alumni — and between Northwestern and its alumni and friends.

A full list of the 2018–19 NAA board members is included on the NAA website. Read more about each director below.

Samir Mayekar ’06, ’13 MBA (Chicago)
NAA President
Samir Mayekar is co-founder and CEO of SiNode Systems, a venture-backed company developing advanced materials for the lithium-ion battery industry. He also serves as an adviser at the Albright Stonebridge Group. Mayekar previously worked in the U.S. government as a member of the White House national security team from 2009 to 2011. Before serving as NAA president, he was president of the Northwestern University Marching and Band Alumni (NUMBALUMS). A mentor to students and alumni, he has served on the University’s Board of Trustees since 2016.

Mark Ledogar ’89 (Oak Park, Ill.)
Immediate Past President
Mark Ledogar serves as president of One Smooth Stone, an event and communications agency based in Downers Grove, Ill. Previously, he directed the convention and tradeshow division of SmithBucklin, the world’s largest association management firm. As a longtime volunteer, he has shared his leadership, talent and interests with the Northwestern Alumni Association and Board of Trustees.

Albert Manzone ’93 MBA (’18, ’22 P) (Kilchberg, Switzerland)
Vice President
Albert Manzone is chief executive officer at Flavors Holdings, Merisant, Mafco, a global sweetener and flavors company. A global business leader, he has more than 25 years of accomplishments in the consumer products industry and at McKinsey & Company. Since 2016, he has served as president of the Northwestern Alumni Club of Switzerland.

Lisa Mar ’87, ’94 MBA (Hong Kong)
Vice President
Lisa Mar is managing director of The Mar Partnership, a Hong Kong-based consulting firm. An international strategist and experienced executive, she has spent the majority of her career working overseas. As a Northwestern volunteer, she established the Alumni Admissions Council in Hong Kong and helped reestablish the Kellogg Alumni Club of New York.

Renetta McCann ’78, ’12 MS (Chicago)
Vice President
Renetta McCann is chief inclusion experience officer for Publicis Groupe. An innovator in the advertising, marketing and media industries,she focuses on building brands and the organizations and leadership to sustain them. She is an adjunct lecturer in Northwestern’s Master of Science in Learning and Organizational Change program and supports the Northwestern University Black Alumni Association.

Bethany Crystal ’09 (New York)
Council Director
Bethany Crystal is the general manager, network at Union Square Ventures. Previously, she worked at Stack Overflow, an online community for software developers. Her Northwestern activities include serving as president of the Medill Club of New York City from 2014 to 2017. Crystal will serve a continuing two-year term, ending in September 2020.

Katie Evans ’20 PhD (Boise, Idaho)
Student Director
Katie Evans is currently a fourth-year Ph.D. candidate in Northwestern’s Interdisciplinary Biological Sciences Graduate Program. Originally from Idaho, she received her bachelor’s degree at the University of Utah. She has been active with the University’s Graduate Student Association since 2016. Evans will serve a one-year term, ending in September 2019.

Daniel Gamba ’97 MBA (’21 P) (New York)
Director at Large
Daniel Gamba is global head of active equity product strategy and a member of the global operating committee at BlackRock. Previously, he held senior executive positions at iShares Americas and Barclays Global Investors. He is an active supporter of the Kellogg alumni community in New York City. Gamba will serve a continuing term for one year, ending in September 2019.

Kristin McDonnell ’85 (’21 P) (Menlo Park, Calif.)
Director at Large
Kristin McDonnell is managing partner of Menlo Group, an advisory and investment firm that works with tech and media companies globally. She has held executive positions at Fortune 100 corporations and Silicon Valley startups. She serves on the advisory board of Northwestern’s Farley Center for Entrepreneurship and Innovation and on the Northwestern University Leadership Circle San Francisco Regional Board. McDonnell will serve a three-year term, ending in September 2021.

Jim Palos ’89 MBA (Chicago)
Director at Large
Jim Palos, executive director of the Hyde Park Institute, has served as chief executive for several nonprofit institutions committed to educational access. He has played active roles with the Kellogg Alumni Council and the Latino Alumni of Northwestern University. Palos will serve a continuing term for one year, ending in September 2019.

Sarah Personette ’01 (Fair Haven, N.J.)
Director at Large
Sarah Personette begins a new role in mid-October as global vice president of client solutions at Twitter after serving as chief operating officer at Refinery29. Previously, she was vice president of the global business marketing team at Facebook. She is a member of the Northwestern University Leadership Circle New York Regional Board and the Women’s Initiative of Northwestern. Personette will serve a three-year term, ending in September 2021.

Lynn Ellen Queen ’81 (Richmond, Va.)
Council Director
Lynn Ellen Queen is principal of Queen & Associates (Q&A), a firm dedicated to leadership excellence. She is also an executive coach and a speaker on leadership topics. She became president of the NU Club of Virginia in 2016. Queen will serve a continuing term for one year, ending in September 2019.

Christopher Rooney ’96, ’02 MBA (Oak Park, Ill.)
Director at Large
Chris Rooneyis president and founder of Digital Bridge Solutions. Previously, he worked for 10 years in various marketing, strategy and technology consulting roles. His volunteer service includes chairing and serving on the alumni board for A Day With Northwestern. Rooney will serve a continuing term for one year, ending in September 2019.

Mike Saxvik ’03 (Denver)
Council Director
Mike Saxvikis vice president for growth and partnershipsat BridgeEdu, an education startup that offers a hybrid technology and coaching solution designed to help promising first-generation and Pell Grant–eligible college students achieve success in their pursuit of higher education. He has 15 years of experience in his field. Saxvik served on his 5th and 10th Reunion committees, and on the Alumni Admissions Council. Saxvik will serve a three-year term, ending in September 2021.

Robby Stein ’07 (Redwood City, Calif.)
Director at Large
Robby Steinis product director at Instagram in Menlo Park, California. Previously, he was the cofounder and CEO of Stamped, acquired by Yahoo in 2012. Since graduation, he has volunteered on the Northwestern University Leadership Circle Young Alumni Board. Stein will serve a three-year term, ending in September 2021.

Katherine Su ’20 (Woodridge, Ill.)
Student Director
Northwestern junior Katherine Su is pursuing a major in materials science and engineering and a minor in computer science in the McCormick School of Engineering. She hails from the Chicago suburbs. She is active with the Student Alumni Alliance and was a student host for the NAA’s Dinner with Twelve initiative in 2017. Su will serve a one-year term, ending in September 2019.

Chris Taylor ’07 (Manila, Philippines)
Director at Large
Chris Taylor serves as the global head of service quality at Uber Technologies. He has also worked at The Boston Consulting Group in Chicago. He became president of the NU Club of Boston in 2016.Taylor will serve a continuing two-year term, ending in September 2020.

Ashley Walker ’04 (London)
Council Director
Ashley Walker is a capital markets management consultant at Accenture in London, England. She previously worked in equity derivatives project management at JPMorgan. In 2015, she became president of the Northwestern Alumni Club of the United Kingdom. Walker will serve a continuing two-year term, ending in September 2020.