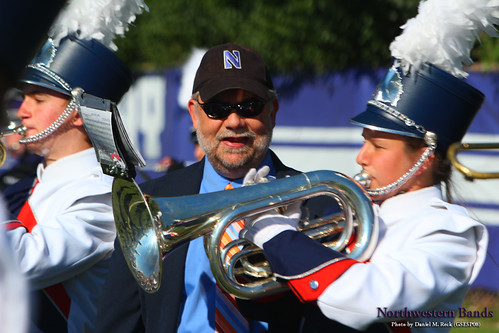 SEPTEMBER 12, 2012 — EVANSTON, ILL. — "My first memory in high school band in 1968 is when we all loaded into busses to come to Northwestern's High School Band Day," says Dr. Dave Fodor (GMu98). "It was Northwestern versus Wisconsin, and Mr. Paynter was the NU band director."

"I understand the importance of the role the band plays," he says of why his band participates in the annual event, which saw over 1,000 high school students crowding between the end zones at half time.

Fodor knows a little something about the collegiate experience, too. While he studied music education at the now-Bienen School of Music to earn his Ph.D., Fodor was the drumline instructor for the Wildcat Marching Band. 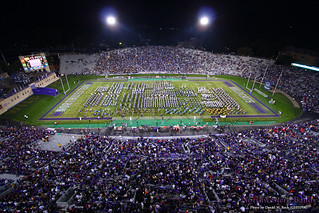 That experience, combined with the closeness shared by Northwestern and Evanston Township, has influenced some traditions in the high school band, Fodor says.

"We do our band camp at George Williams College, which is where NUMB's band camp used to be," he says.

"The Mambo Cadence is used by both bands, and we do have our own SpiriTeam," Fodor says. The SpiriTeam is a pair of especially energetic band members whose responsibility is to promote pride and guts, commonly called "P&G" among their bandmates.

"In fact," Fodor says, "one of my students came to NU after graduating from Evanston Township. Andrew Day joined NUMB and had a great time."

Joining Fodor at the helm of the Evanston Township band this year is Matt Bufis, formerly of Westmont High School, who will succeed Fodor as director of the school's band program, which also includes three concert bands.

"He's great," says Fodor of Bufis. Looking forward to the rest of the year, "we have a special concert planned for the spring which we're working on." 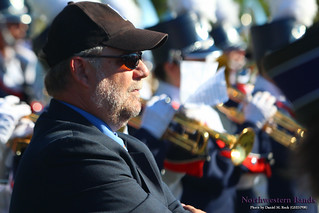 When asked about his thoughts about retiring after 36 years carrying the baton, Fodor says he's "looking forward to it. But I'm taking it one day at a time."

The Evanston Township Marching Band's next home performance will be at Lazier Field at Memorial Stadium on October 5 when their football team takes on Maine South High School.

The Northwestern band has returned to band camp this week, and will be back in action this Saturday at Ryan Field when the Wildcats challenge Boston College at 2:30 p.m. The band's free pre-game concert at Wildcat Alley will begin at about 1:30 p.m.

Tickets for the game, and all Northwestern home football games, are available at NUsports.com or by calling 888-GO-PURPLE. The game will be broadcast on Big Ten Network, and fans can follow the play live at @NU_SportsLIVE on Twitter. They can also find Head Coach Fitzgerald on Facebook and Twitter, and Wildcat Football is also on Facebook and tweets as @NUFBfamily. Be sure to also follow Twitter hashtag #B1GCats for the latest Wildcat athletics action.