Warmed Up, NUMB is Headed to the Gator Bowl 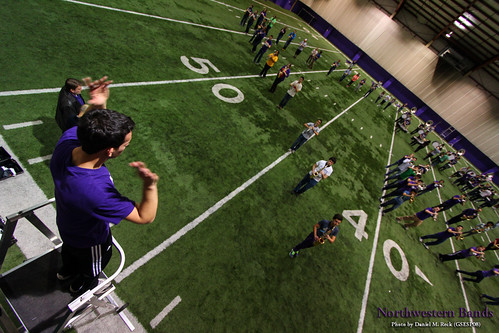 DECEMBER 28, 2012 — EVANSTON, ILL. — Even as a few snow flakes float down outside Trienens Hall on the Evanston campus, the Northwestern University "Wildcat" Marching Band is warming up to make their fifth straight bowl game appearance in support of the Wildcat football team.

"This trip is very important on a number of levels," says Director of Athletic Bands Daniel J. Farris. "We're representing the team, the athletic department, the Bienen School of Music, and all of Northwestern. It's a real privilege."

During the rehearsal, students nod enthusiastically as Farris talks about the level of professionalism the band brings to bowl trips. For tradition, more than because anyone has asked them to, the band members will fly to Jacksonville tomorrow wearing their best business dress, including ties for the gentlemen.

This is the third time in the last four years that Northwestern will appear in a New Year's Day bowl game, and the band's schedule is busy. Upon arriving in Jacksonville, they'll immediately head to a local high school to continue rehearsing. 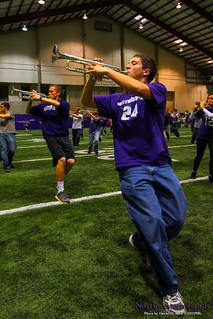 On Sunday, Dec. 30, they will rehearse again and enjoy an afternoon beach barbeque before performing for arriving fans at the Omni Jacksonville Hotel, which is also housing the Wildcat team.

Fans, parents, friends, alumni and the public are all invited to an open rehearsal on Monday, Dec. 31, at Atlantic Coast High School, 9735 R.G. Skinner Parkway, Jacksonville, Fla. The rehearsal will run from 9 a.m. to 11 a.m. ET.

"It was really great to see a great turnout of fans at last year's open rehearsal in Houston," says Farris. "We're glad to welcome fans to our rehearsal."

"Game day is super busy," says Farris. "Everyone will need to be at their very best and we're starting early. We'll play for the team at the Omni around 9 a.m."

Then in a carefully choreographed maneuver, the Wildcat band will move to EverBank Field to play for the Northwestern Alumni Association Pep Rally at 10 a.m. ET, followed immediately by the Gator Bowl Budweiser Tailgate Party at 10:30 a.m. ET. The Gator Bowl tailgate will be hosted at the Entertainment Zone outside the south end zone of the stadium. 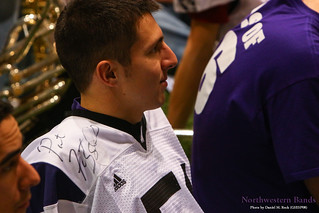 After grabbing a quick snack, the band will move inside EverBank Field to prepare for an 11:37 a.m. ET pregame performance.

"We play first at pregame, followed by the Mississippi State band," says Farris. "We will reverse the order at halftime."

After cheering the 'Cats, the band will change back into their business attire for the flight home.

Kickoff on Tuesday, Jan. 1, is set for noon ET, with national television coverage provided by ESPN2 and the radio call in Chicago available on WGN720 and WNUR (89.3), and fans can follow the play live at @NU_SportsLIVE on Twitter. They can also find Head Coach Fitzgerald on Facebook and Twitter, and Wildcat Football is also on Facebook and tweets as @NUFBfamily. Be sure to also follow Twitter hashtag #B1GCats for the latest Wildcat athletics action.