NOVEMBER 11, 2012 — KALAMAZOO, MICH. — It was a frenzied scene as cases of drums, sousaphones, drum major podiums, and the flags of the Big Ten Conference were carried from Regenstein Hall of Music to four coach buses waiting on the Northwestern University campus in Evanston, Ill.

The student staff of the Northwestern University "Wildcat" Marching Band used their best geometric skills to pack it all in along with scores of other instruments, uniforms, and luggage.

Tomorrow, the band will support the Wildcat football team, who will challenge the University of Michigan Wolverines at noon (ET).

"Yeah, the students gave me some flack about that," says director of athletic bands Daniel J. Farris. "In previous trips, we've been able to leave later, but the early start tomorrow made it necessity."

Now the band coasts comfortably along through Indiana toward Ann Arbor, Mich. Some students are studying, a few are sleeping. Still others are using masking tape to replicate the university's official seal on bus windows. 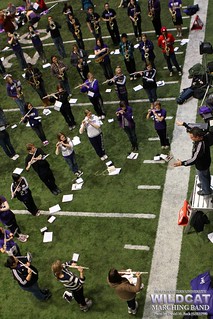 With the bye week, the Wildcat band got started preparing for their out-of-town performance during last week's rehearsals.

"Even when they were rehearsing the Michigan fight song, they worked really hard on all the runs and lines so that they could sound good," says Laurie Bonner (GMu13), the music education graduate student working with the Northwestern Bands.

"They always take the same level of desire for success to everything they do," she says.

"Halftime is going to be a challenging show," says Farris as the busses pull in for "scrumptious yum-yums" (dinner) along Interstate 94 at Kalamazoo, Mich.

At one of the restaurants, local magician Alan Kazam entertained students at the tables. Before their eyes and in their very own hands, tiny sponges in the shape of bunny rabbits appeared and disappeared. Kazam formerly played trombone in the Western Michigan University band.

Before long, the band had reboarded their busses to resume their sojourn. Tonight they will relax, get some sleep, and wake before 6 a.m. for breakfast. They will rehearse on the Michigan band's rehearsal field from 8:30 until 10 a.m.

Although some "heavy dew" (rain) is expected in the morning, Bonner is confident in the band's preparations.

"They are bringing a high level of professionalism and hard work," she says. "They'll make it go."

The Wildcat Band will march to Michigan Stadium, commonly called the "Big House," and will arrive at 11 a.m.

"I've never been to Ann Arbor, so I'm excited to see the stadium and the town," says Bonner.

Per Big Ten tradition, Farris will conduct the Wolverine band for the national anthem.  At halftime, the bands' performance order will be reversed.

After the game, the Michigan band will host their guests from Northwestern for a private reception at Revelli Hall, before the Wildcats return home tomorrow night.

Tomorrow's game will be televised on ESPN, and can be heard in Chicagoland on WGN Radio (720 AM) and Northwestern's student radio station, WNUR (89.3 FM and wnursports.com). Fans can also follow the play live at @NU_SportsLIVE on Twitter. They can find Head Coach Fitzgerald on Facebook and Twitter, and Wildcat Football is also on Facebook and tweets as @NUFBfamily. Be sure to also follow Twitter hashtag #B1GCats for the latest Wildcat athletics action.

As usual, the Wildcat Band will tweet from @NUbands, and will be posting on Facebook, Google+, and Foursquare.