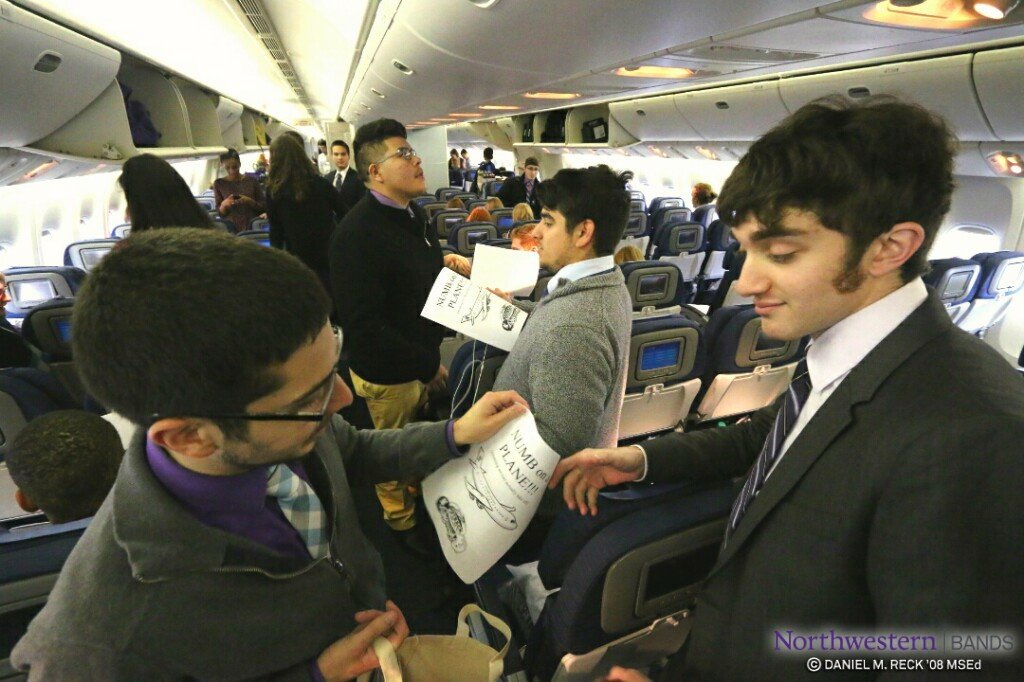 NUMB on a plane! Per tradition, SpiritSheets are distributed to the aboard the plane and the band sings "Go U, Northwestern!" during take off. Photo by Daniel M. Reck '08 MSEd.

DECEMBER 29, 2015 — IN THE SKIES OVER NASHVILLE, TENN. — "Welcome aboard for non-stop service to the Outback Bowl!" The United Airlines flight attendant's announcement received cheers from the Northwestern University "Wildcat" Marching Band, cheerleaders, and guests as the plane prepared for take off to Tampa Bay, Fla.

Severe weather yesterday cancelled or delayed thousands of flights, but the Wildcat Band's rehearsal went on as scheduled last night.

"We're communicating with everyone," says Director of Athletic Bands Daniel J. Farris. "We'll meet some people in Tampa. We want everyone to arrive safely."

Even with a bit of "heavy dew" induced tardiness, the musicians warmed up their instruments and ran throug their newest piece: The University of Tennessee fight song, "Down the Field."

"It is a Big Ten tradition to honor our opponents with their song," Farris reminded his students. "Let's take that again from the top."

Upon landing in Tampa Bay, the Wildcat Band will change from their suits and dresses into something more comfortable for a rehearsal in the welcome 80 degree Florida weather, in preparation for a full slate of Outback Bowl performances: (all times Eastern)

“We follow Tennessee in both pre-game and halftime," says Farris.

After the Wildcat Band's half time show, several Florida high school bands will unite to give a massed performance.

"This is going to be a great trip," says Farris. "You've earned it."