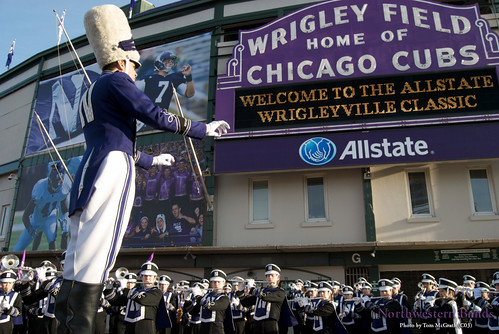 APRIL 18, 2014 — CHICAGO, ILL. — "We have been invited to perform the national anthem and a few other tunes at the 100th anniversary of the opening of Wrigley Field," says Daniel J. Farris, director of the Northwestern University "Wildcat" Marching Band.

The band and other dignataries including Major League Baseball commissioner Bud Selig and Dutchie Caray, widow of the the late legendary Harry Caray, will be on hand for the celebration on April 23. The Chicago Cubs will host the Arizona Diamondbacks in the 1.20 p.m. game, which comes exactly one century after Weeghman Park—now Wrigley Field—hosted baseball.

"After both starting lineups are announced, members of the Northwestern University marching band will take the field, which was customary for Opening Day and other special events during the ballpark's first two decades," writes MLB.com's Carrie Muskat. 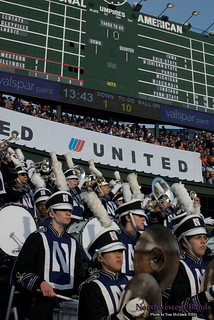 Cubs players and legends will be honored before the ceremonial first pitch, including Ernie Banks, Glenn Beckert, Andre Dawson and others. In the fifth inning, Wrigley Field organist will lead Cubs faithful in singing "Happy Birthday." Then Dutchie Caray will lead the celebration during the seventh-inning stretch.

The Cubs will be wearing throwback Chicago Federals jerseys, and ballpark staff will wear era-accurate Weeghman Park jackets and costumes. Although the Wildcat Band had just been founded a mere three years before old Weeghman Park opened, the band will wear their contemporary uniforms.

This is not the band's first appearance at the friendly confines. They appeared on ESPN's College GameDay in front of Wrigley's iconic sign (painted purple) and marched during the Northwestern vs. Illinois game hosted at the park in November 2010 in the first football match there since 1970.

Of that performance, Cubs chairman Tom Ricketts told the Chicago Tribune, "When I saw the Northwestern band on the field at halftime, I almost cried."

"We are thrilled to partner with a professional sports franchise as iconic as the Chicago Cubs," says Northwestern athletic director Jim Phillips.

Looking forward to Wednesday, Farris says, "This is very exciting and a great opportunity."

Fans are encouraged to arrive early to enjoy the festivities. Additional details are available on the Cubs website.