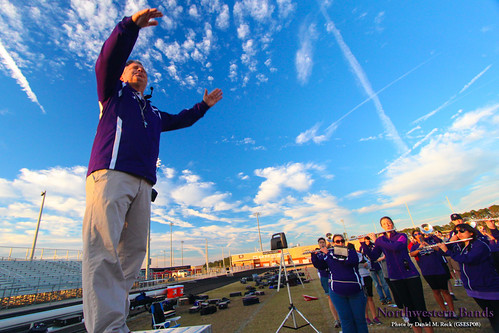 "It was really great to see a great turnout of fans at last year's open rehearsal in Houston," says Farris. "We're glad to welcome fans to our rehearsal." 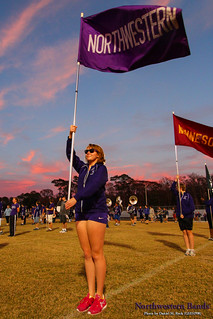 In the dress rehearsal, the band will be performing compete run-throughs of its pregame and halftime shows. There's something for everyone, including Mississippi State fans, who can hear the Northwestern band's rendition of their favorite fight song as they honor their opponents and rivals in the 2013 TaxSlayer.com Gator Bowl.

"It's a very long tradition in the Big Ten to honor your opponent by playing their fight song," says Voice of the Band Pete Friedmann, who is himself a NUMBALUM (an alumnus of NUMB). The band's color guard also presents the colors from every Big Ten Conference school during their pregame show.

In the rehearsal, the Northwestern musicians work hard to perfect "Hail State." Their goal is to perform it as well as the Mississippi State band, with whom they will share the field at EverBank Field on New Year's Day.

Fans attending the rehearsal will also be able to hear a preview of the halftime show, which will feature music from the Foo Fighters, as well as a special drill set prepared just for the Gator Bowl.

Anyone who cannot make it to the open rehearsal can still get a glimpse of the Wildcat Marching Band later in the day, at the 3 p.m. ET Gator Bowl Parade in downtown Jacksonville. They will also appear at a Gator Bowl pep rally at 5 p.m. at Jacksonville Landing. 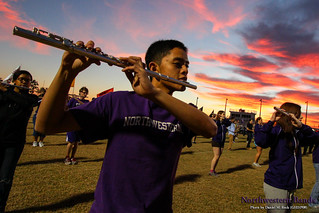 Kickoff is set for noon ET on Tuesday, Jan. 1, with national television coverage on ESPN2 and the radio call in Chicago available on WGN720 and WNUR (89.3). Fans can follow the play live at @NU_SportsLIVE on Twitter. They can also find Head Coach Fitzgerald on Facebook and Twitter, and Wildcat Football is also on Facebook and tweets as @NUFBfamily. Be sure to also follow Twitter hashtag #B1GCats for the latest Wildcat athletics action.